A while back there was a commercial that featured a man sitting in front of his computer screen. He was manipulating his keyboard to quickly jump from site to site on the internet.  In the background we could see his wife watching television.

He surfed the web faster and faster until he suddenly froze in front of an unexpected message.

“You have reached the end of the internet.”

His wife called from the other room, “Honey, what’s wrong? I thought you were surfing the internet.”

He stared dazedly at the message on the screen. “I’m done.”

This is how I feel this week.

There seems to be no further point in trolling news articles and contemplating opinion pieces.  I just don’t have the chops for it right now.  I sat down at my own computer every day for the past week and stared at the un-motivating blank screen in front of me.  Instead I’ve spent my time researching a variety of subjects including:

-Why does my hip hurt again and whether it is possible to refracture a healed hip by stupidly going for a run on cobblestones.

-Additional treatments for fear of flying.

-The exciting possibility of record breaking days of intense heat in Dallas.

Periodically I leave the computer to check the contents of my pantry.  The latest report indicates there are chocolates and pop tarts in there.  I can also truthfully attest that the strawberry flavored pop tarts can call my name louder than the blueberry and cherry flavors.  I am also wondering why we have so many damn pop tarts in this house in the first place.  It is possible I am about to fix this problem.

I could be cleaning my closet.  Two months ago I realized this was a task I needed to undertake.  As a first step I bought many sleek hangars to render a clean symmetry to my soon to be organized clothing. All that has happened since then is that the closet remains as cluttered and disorganized as ever, and it is now harder to find the shoes I want because the stupid bag of hangars is in my way.

Plus, I came back from a writing class at the Iowa writing festival with no additional motivation to work on my manuscript.

I mean zero motivation. I have lost my mojo. I am mojo-less.

So, I’m making an effort to reach out and remind myself I am still here even though at this moment I have nothing left to say, and I have apparently reached the metaphorical end of the internet. My closet is messy, my hip is out of commission,  I can’t run, and somehow there are suddenly two less pop tarts in the kitchen pantry. Still,  I have to believe that I will feel better soon. I must believe in the return of lost mojo.

This slump or setback, or whatever you want to call the non-focusing total non-productiveness of this week will pass.  I have to believe I will once again think and write, run and clean, read and contemplate.

But since I can’t seem to get there today, I have decided to go backwards instead.

In fact, I’m going six years backwards to when I accomplished something meaningful to me. Something I thought would propel me forward to future endeavors.  I share this memory as a reminder that we all cycle forward. Up and down through good things, bad things and things that just make us feel blah.

Here I am in my one and only marathon.  That is me, in the turquoise running jacket that doesn’t fit me anymore. Running on a hip not yet injured, on a day when I got to celebrate an important moment with my family.

These days will cycle back.  I know it.  Just not today. 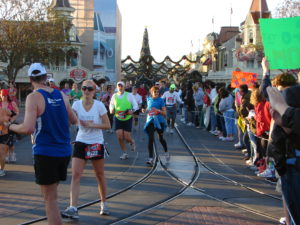 Welcome to Thought Before Action

"Between stimulus and response,
There is space.

In that space is our power
To choose our response.

In our response lies our growth
And our freedom."

Together let's use that moment between thought and action to consider, debate, and investigate.

Open discussions and open thought. All voices are welcome. There is so much to think about!

Life is A Highway